Sexy Serenity, A Memoir was awarded a Five-Star review, their highest rating, by Readers' Favorite! 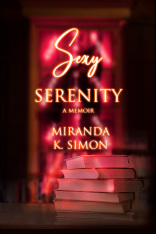 “No matter what anyone says, I’m not a whore.” That becomes Miranda K. Simon’s daily mantra as she struggles to save both her soul and her sanity dancing in some of the seediest strip clubs in Hollywood and Las Vegas. Her biggest challenge: Can she make it out of this shady underworld with her self-worth, ambitions, and priorities as a young mother intact?

Sexy Serenity is Miranda’s unabashed diary of her life as a young college student who is forced by poverty to betray her long-held morals and become a dance hostess at an infamous underground club in downtown Los Angeles. With a one-year-old son, nowhere else to turn, and a hearty dose of naïveté, she does what she must to make ends meet.

From the beginning of her new “career,” Miranda constantly struggles to adapt to nightly grinding sessions with the city’s creepiest men and the pressure to date clients outside of the club. When she feels her safety has been compromised, she tries to escape hostess clubs and her clients by stripping off her values and her clothes. As she reluctantly moves into nude exotic dancing, she becomes known as Serenity, a woman who has no problem getting naked for men, one who doesn’t cry every night at the horror of it all. Between dressing up as a cop and being fingerprinted by one, Miranda’s life quickly plunges into chaos. After earning (and paying for) her college degree, she faces brazen discrimination against single mothers at her new corporate job. She still can’t afford rent and needs to work weekends at the clubs. It seems every time she tries to quit, something else goes wrong. But when one of her past clients shows up at her office, trying to win her back with diamond earrings and cheap promises, Miranda can no longer deny her past. In order to save her reputation, her son, and her future, can she has to say goodbye, finally, to the twisted allure of stripping?

See what reviewers are saying:

"Sexy Serenity a Memoir by Miranda K. Simon is a fascinating story...I recommend this book to anyone who thinks that working in the adult entertainment industry is easy." - Jessyca Garcia, for Reader's Favorite

"This memoir reads like a novel, drawing out every ounce of emotion from the reader and keeping him or her turning pages... A must-read for anyone who is struggling to get their life back under control and find peace with themselves."

"As candid as it is superbly narrated, 'Sexy Serenity: A Memoir' is a compelling autobiography that grips the reader's total attention and holds it firmly from beginning to end. Very highly recommended reading." - Midwest Book Review

"Written in a casual, easy-to-read style. The first-hand look at the inner workings of this sex industry is intriguing and I found her writing to be candid...I am sure it can serve as an inspiration to people." - Gisela Dixon for Readers’ Favorite