Author and storyteller David Eugene Andrews has a heart for people. At age 17 he organized a food drive to feed the homeless in his hometown. At age 20, following the fall of Saigon, he worked at a Vietnamese refugee camp, setting up English as a Second Language classes across Washington state. The next year, while attending college in Oregon, he co-chaired an International Affairs Symposium on the Middle East and the Oil Crisis.

David Eugene Andrews holds degrees in International Affairs and International Economics. He has studied Chinese and German, loves languages, and likes to travel. At the height of the Cold War in 1984, an AP photographer captured him bearing an American flag, shaking hands with a Russian holding a Soviet flag. USA Today featured Andrews, a former ski instructor at Mt. Hood in Oregon, on its front page during its coverage of the Opening Ceremonies at the Winter Olympics in Sarajevo, Bosnia.

Andrews, who recently completed his J.D., has edited and published numerous international economic forecasts for Fortune 500 companies. He now writes entertainment articles, serving as Editorial Director for EZ Way Magazine, a new magazine out of Hollywood. His articles have appeared in the Washington Times, Rockthiz magazine, and on WTV Networks.

David Eugene Andrews also completed his first novel, The English Slave. This first work of historical fiction series tells the true story of how Captain John Smith—sorely wounded while fighting for the Holy Roman Empire in Eastern Europe—was sold into slavery. It reveals the true identity of the Turkish noblewoman who received John as gift from her betrothed.

An epic story of love and war, rebellion and power, religion and beauty, The English Slave encompasses the expanse of Europe. 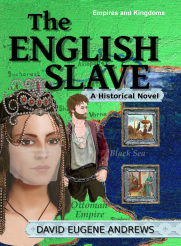